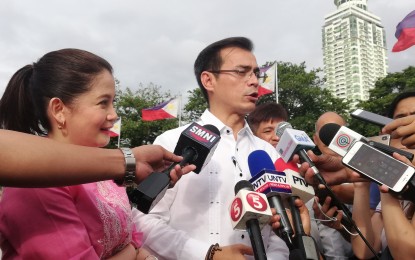 MANILA– Tourism chief Bernadette Romulo-Puyat said the national government stands ready to assist the City of Manila in improving its tourism industry as she lauds the initiatives of Mayor Francisco “Isko Moreno” Domagoso in cleaning the capital.

“For us, in any way that we can help the mayor, we are ready to extend help,” the Tourism Secretary said during an interview at the Rizal Park on Tuesday.

“Mayor Moreno is for heritage tourism, maintaining the old-buildings, and having a clean city. Indeed, we can have sustainable tourism in the city,” she said.

The Tourism chief joined Domagoso for an ocular inspection of major areas in the Manila “tourism circuit” including the Bonifacio Shrine, the Plaza Roma in Intramuros where the two officials rode the iconic bamboo bikes, and the Rizal Monument in Luneta.

For the remaining three years of the administration’s term, Romulo-Puyat vowed that DOT attached agencies such as the Intramuros Administration will focus on addressing the problem of informal settlers and developing a hub for the creative industry inside the walled city.

The National Parks Development Committee along with Tourism Infrastructure and Enterprise Zone Authority (TIEZA) will also lead in the redevelopment of Rizal Park, particularly the Esplanade and the Children’s Playground to attract people anew to visit Rizal Park.

Romulo-Puyat said she sees the potential of increasing arrivals in the capital as Manila serves as a “drop-off point” to a number of foreign and local tourists.