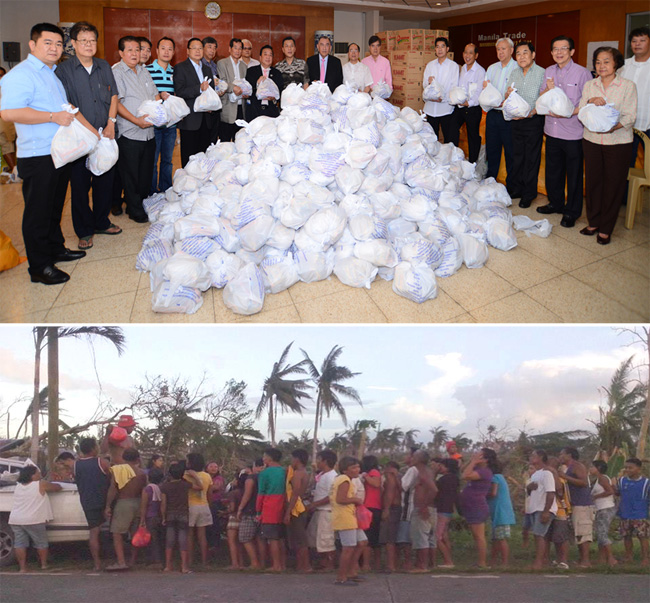 They also met with Mayor Remedios Petilla of Palo, Leyte who offered a 5-hectare lot to the Chinese-Filipino community should they want to build houses for the victims. Dr. Lucio Tan relayed the offer to the leaders in charged of the Chinese-Filipino Community Calamity Fund who immediately came up with a proposal to construct 500 settlement houses in Palo, Leyte in the amount of 40 Million pesos. FFCCCII is currently coordinating with the municipal government of Palo, Leyte for the housing project.

Dr. Robin Sy, FFCCCII Honorary President, provided free use of barges through his Asian Shipping Corporation (ASC) to transport heavy equipment of the Metropolitan Manila Development Authority (MMDA), personnel, relief goods and volunteer workers of different groups from Manila to Tacloban and Cebu to Tacloban. Dr. Robin Sy also provided free use of barges to transfer medical equipment and volunteers from the Peace Ark Hospital Ship of China and Red Cross Society of China who are now extending medical services in Tacloban City, Baybay, Abuyog, Leyte and other areas.

FFCCCII Secretariat Staff Ms. Mercy Lim assisted and served as translator of the Red Cross Society of China team and personnel of Peace Ark Hospital Ship of China during their medical mission in Tacloban City.

FFCCCII was assigned to pull out relief goods from Villamor Airbase, Cargo House and NROC, with the latter serving as the center of operation, and deliver to Manila International Center Terminal.

In spite of being a peak season for deliveries with the upcoming Christmas season, FFCCCII officers and members generously lent their own trucks and provided free gas and drivers to mobilize “Oplan Hatid Relief Goods”.

Aside from this, 2 Million pesos was allocated from the Chinese-Filipino Community Calamity Fund to rent additional trucks and purchase 1,000 pallets and 360 rolls of film wrap to pack the relief goods. Pallets were used to move the relief goods easier.

FFCCCII President Alfonso Siy designated FFCCCII Executive Director Melesa Chua to be the representative of the Chinese-Filipino community at NROC. Mrs. Chua, who has been staying at NROC more than 16 hours a day, has been commended for her excellent service and was chosen by Secretary Purisima to help oversee the operations. She saw the need to fast track the operation and set up a 24-hour command center to set up communication with truck drivers. Security and fast-lane for trucks carrying relief goods at the pier were also requested by FFCCCII.

On average, 30 trucks are used daily for “Oplan Hatid Relief Goods”. From November 15 to December 1, the trucks made more than 150 trips from NROC to the pier and back again delivering more than 420,000 sacks of relief goods.

Since 1954, FFCCCII has launched similar relief campaigns such as “Operations Yoling” in 1970, “Operations Pakikisama” Central Luzon floods in 1972, “Operations Frank” in 2008, “Operations Ondoy” in 2009, “Operations Sendong” in 2011, during the worst floods ever to hit the country.

FFCCCII and the Chinese-Filipino community re-affirm its full support to our Filipino brothers and sisters in the relief, recovery and rehabilitation efforts on the devastation brought about by supertyphoon ‘Yolanda’. Together, we will rise from this catastrophe.