Carlos Yulo came through with a performance to remember in the floor exercise and captured the historic first gold medal in the 49th FIG World Artistic Championships in Stuttgart, Germany on Saturday night. 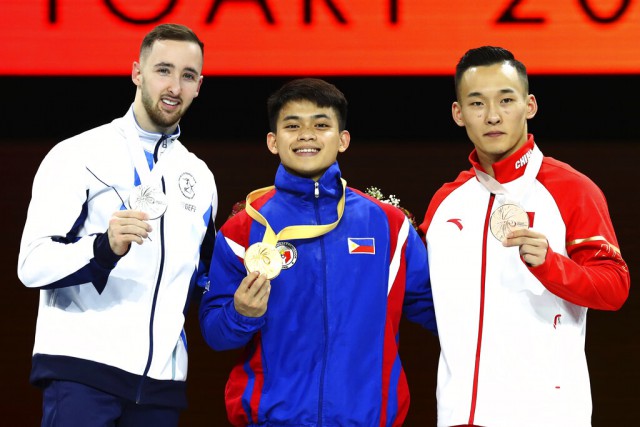 Carlos Edriel Yulo of the Philippines, center and gold medal, Artem Dolgopyat of Israel, left and silver medal, and Xiao Ruoteng of China, right and bronze medal, show their medals during the award ceremony for the men’s floor exercise during the apparatus finals at the Gymnastics World Championships in Stuttgart, Germany, Saturday, Oct. 12, 2019. (AP Photo/Matthias Schrader)

Performing second to last among the eight finalists, the 19-year-old Yulo displayed a flawless graceful performance to tally 15.300 ahead of top qualifier Artem Dolgopyat of Israel (15.200) and multiple world champion Xiao Ruoteng of China (14.933).

Raising the degree of difficulty from 6.2 to 6.5 paid off for Yulo as he became the first Filipino world champion in the discipline.

Last year, he bagged the bronze medal in the same event held in Doha, Qatar. 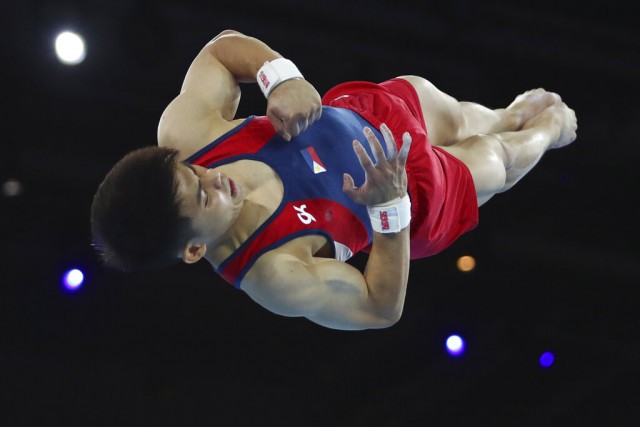