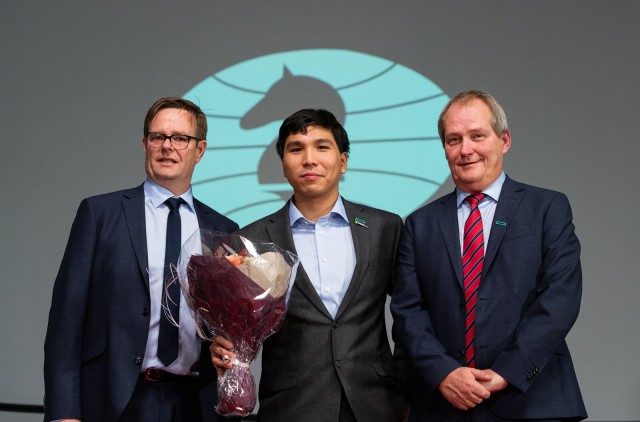 Wesley So, center, during the awarding ceremony. (Photo courtesy of tournament website)

It was a one-sided affair for So, who was born in Cavite but who now represents the United States, as he went unbeaten with four wins and two draws, needing just six of the scheduled 12 games to topple Carlsen.

After drawing the first game and winning the other three of the “slow rapid” games Friday and Saturday, So split the point with Carlsen in 28 moves of the first “fast rapid” game and then overwhelmed the latter in 29 moves in the next match to claim the distinction as the first world champion of the new chess variant. 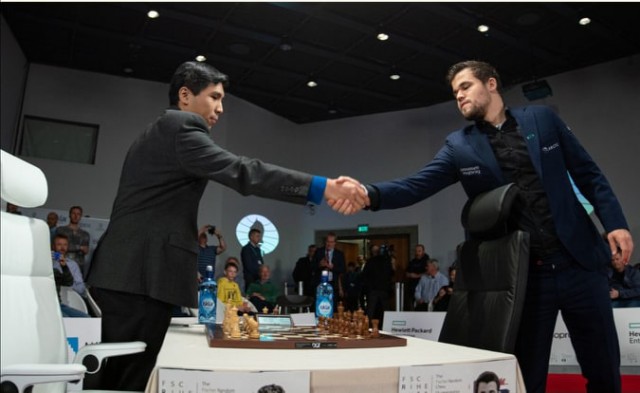 So finished off Carlsen with still six games to be played; the next two would have been in fast rapid and the last four in blitz.

The 26-year-old So left the country five years ago for the United States to pursue a dream of becoming world champion.

He eventually achieved that goal but only in a different chess category conceptualized by the late former American world champion Bobby Fischer with the goal of quashing overreliance on chess engines while promoting resourcefulness and creativity.

So is rated No. 8 in the latest FIDE rankings, with Carlsen at No. 1.